Protect Your Business Before You Sign a Commercial Lease 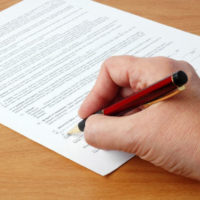 One of the most important, and often overlooked, terms in a commercial lease is the Termination Clause. No proprietor wants to believe that their business might fail or the need to downsize will arise; however, this is absolutely something that a prospective lessee must confront when entering into a long-term (e.g., 5- or 10-year, or more) lease agreement.
Large-space renters, such as anchor tenants, should use their leverage to demand lease termination provisions that are favorable to them. The provision could be as simple as a modification stipulation allowing the tenant and landlord to modify the length of the lease at a later date. There are a few termination clauses to consider, though, which give the tenant more power in the event of an early termination: a break lease clause; a cap on the amount of money for which the tenant is liable should you terminate the lease early; or, an assignment or sublet clause.

A Break clause gives the tenant the option to terminate a lease at least once during the term of the lease. There are usually conditions precedent which must be met in order to trigger the break: Those conditions can vary depending upon what the landlord and tenant initially agree and can arise at a specified time during the term of the lease. For example, the lease could allow for ending the contract six months prior to the end of the initial lease term as long as the tenant provides a two-month notice to the landlord.

In the event of an early termination of the lease, a tenant is typically obligated to pay rent that arose prior to the termination but not post-termination, unless specifically provided for in the lease. See the case of 275 Washington Street Corp. v. Hudson River International, LLC, 465 Mass. 16 (2013). In reviewing a commercial lease, the tenant should be wary of provisions allowing the landlord to collect post-termination rent and other damages and should negotiate a cap on those damages if need be.

An Assignment of Lease occurs when the tenant transfers their interest in a leased property to another party before the original lease expires. Typically, the tenant is responsible for finding a new lessee, but the landlord would need to approve the new tenant. An assignment differs from a sublease in that the tenant is assigning the whole of their interest in and to the premises, and the lease is terminated as to that initial tenant. A sublease is a tenancy agreement between the tenant (sublessor) and a new party (sublessee) and could be for only a portion of the leased premises.